10 Cool things about ‘Shock the Monkey’ 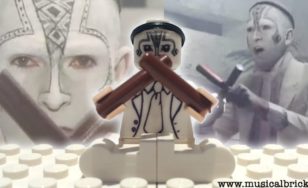 1. This song is not literally about shocking someone or a monkey.

Peter Gabriel has never elaborated much on the meaning of “Shock The Monkey,” other than to say in a 1993 interview, “This song is about jealousy and a sort of animal nature.”

However, another Gabriel song, “We Do What We’re Told,” was inspired by the infamous 1961 Milgram experiments in which subjects believed they were administering shocks to other test subjects and continued to administer higher and higher “shocks” when instructed to do so.

2. “Shock the Monkey” was the first song from Peter Gabriel that charted in the U.S. Top 40.

It also charted higher in US than the UK.

He was a member of the band Van Der Graaf Generator.

5. The music video was directed by Brian Grant, who has directed TV episodes of “Doctor Who,” “Hex,” and the film “The Immortals”.

He also directed the music videos: “How Will I Know” by Whitney Houston, “She Works Hard for the Money” by Donna Summer and “Physical,” by Olivia Newton-John.

6. Although dark and disturbing the video has many layers.

Gabriel is shown in two guises: A modern-day businessman and a spiritual shaman with white tribal markings. By the end of the video, he’s given in to his more primitive self. Grant expands “men, as time has progressed, have sort of lost their primeval instincts. As we become more modern and the more technology takes over, the less instincts we have. That’s what the two men in the video basically represent. The man in the business suit represents modern man. The man in all white is representative of his more primal side trying to tap into his subconscious. The white just felt more tribal, more primeval and we drew our inspiration from some tribes in South America.”

8. This song was featured in the South Park episode “Raisins”

When Stan held up a boom box playing this song on Wendy’s front lawn only to find out she was with Token. The scene was a play on the movie Say Anything, which featured Gabriel’s song “In Your Eyes.”

9. This song was used in the opening credits sequence for the 1987 film Project X.