10 Reasons Why Supper’s Ready is the Greatest Song Ever!

Home10 Reasons Why Supper’s Ready is the Greatest Song Ever! 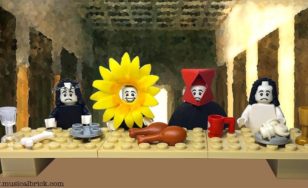 It fits on one side of an LP record and runs for 22.54 minutes. This is story telling at it’s best, with enough space to include a love song and an adventure into strange new worlds. Sometimes it’s nice to sit down and enjoy a seven course meal, rather than a quick burger. The atmosphere of the song is electric. The best 23 minutes you’ll ever spend.

We all love stories, and Supper’s Ready really takes advantage of an interesting narrative and concept, just like a great book or movie. It is divided into seven sections and tells the story of two lovers who travel to strange worlds, eventually returning to their world only to witness the Apocalypse. Essentially it is a story of good versus evil, with some surreal parts, and a lot of biblical and literary references.

This is the most addictive song ever, and will never get boring on repeated listens. In fact new elements, sounds, references are found on each new listen. The mix of instrumental virtuosity, unpredictability and catchy melodies is absolutely astonishing. What style or sound do you like? It’s Progressive Rock, so it will include everything: fast, slow, hard, soft, acoustic, electric, folk, ballad, odd time signatures, and high-energy instrumentals. This song has it all! The song encapsulates everything great about Genesis during this era. Become lost in this labyrinthine music.

4. It was written by Genesis

Five of the best song-writers/musicians ever, composed and performed the best music ever written. They are good, collectively and individually, just look at their output.

Part 4 of the song cuts short and is taken over by one of Gabriel’s most iconic moments – “A Flower?”. You didn’t see that coming! This is the beginning of “Willow Farm”, in which live, we see Gabriel appear in a “flower mask”. It’s very much a Python-esque scene dealing with the absurd English psyche. This medium-tempo funny rock part full of plays on words was seen as a light relief in the middle of this epic number.

“Six six six is no longer alone!” When Gabriel shrieks this live during the Apocalypse section, you really feel the devil has entered the room. Genesis is a live act. This song goes into another dimension live. As you can see from this website, we absolutely love the costumes 🙂 Why not dress up to add to the music? Theatre and movies do it! See our Lego costumes here

The piece moves on to “Apocalypse in 9/8,” a frightening and powerful section that is gradually built up on an unusual time signature. The musical climax of the suite features a complex organ solo played against a 9/8 rhythm section.

I know this part has been mentioned in number 8, but it deserves to be mentioned twice. In 9 and 8!

This along with the Apocalypse section are so emotionally up-lifting, a real ‘hairs on the back of your neck standing up’ moment. During live performances a magnesium flash would reveal the previously black-clothed Magog masked Gabriel now all dressed in white and holding a neon light in front of him for the majestic finale. The piece ended with a fadeout both on record and on stage, usually leaving the audience breathless. What a way to close a song and an album.