6 Ways to Annoy a Genesis Fan 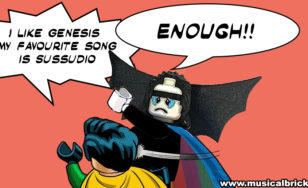 This simple fact is the reason that us Genesis fans could potentially get annoyed when someone says something about ‘knowing / liking’ Genesis.

Just for a bit of fun here are 6 ways you could annoy a Genesis fan:

1. Confuse a Phil Collins song for a Genesis Song

“I really like Genesis especially the song “Against all odds”.

Check out the ‘Peter Gabriel’ version of the above monologue here.

Or a Genesis song is mistaken for a Phil Collins song.

4. Not knowing Peter Gabriel was their first lead singer

Plus not knowing who Steve Hackett is either! The inventor of finger tapping!

5. Not knowing who Genesis are

Genesis? The first book of the Bible?

6. Saying one era of Genesis is better than another

“I can’t stand that Phil Collins”