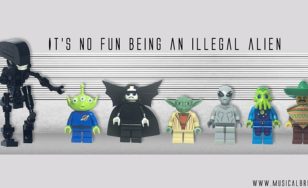 Based in some way on Arthur C.Clarke’s “Childhood’s End”. The book follows the peaceful alien invasion of Earth by the mysterious Overlords (Gabriel’s character), whose arrival ends all war, helps form a world government, and turns the planet into a near-utopia. However mankind eventually evolves leaving Earth and their bodies behind to join a cosmic consciousness called the Overmind.

Tony Banks explains in the 2007 DVD re-release of Abacab: “The idea was that this character had to pretend that he’d just been robbed by people and that’s why he’d disappeared for a few weeks, and in fact what had happened was he’d been taken up in a spaceship and gone to this fantastic world where everything was wonderful and beautiful and everything… but he couldn’t tell anybody that, because no one would believe him.”