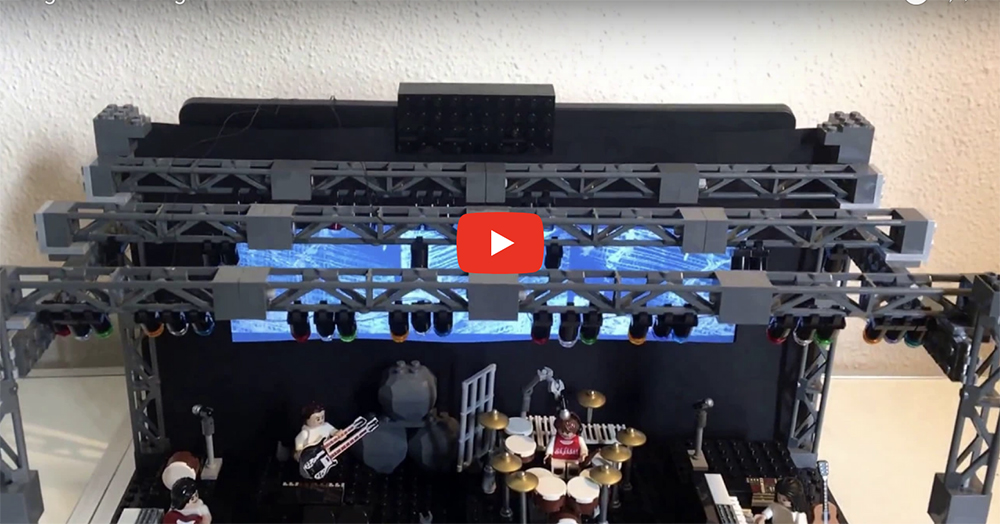 The Lamb Lies Down On Broadway Tour Stage Complete With Slides

This groundbreaking experiment in total theatre had slide projections, laser projections, costumes and kinetic stage lighting. Merged together this performance translated Peter Gabriel’s complicated musical narrative into a visceral, memorable multimedia experience for all that saw it back in 1974/75.

Over the past few months I have been communicating with Michael Pellerin (Pellerin Multimedia) about his creative work on enhancing the Lego stages to incorporate lights (Hope to write about this soon). Recently his work inspired me to try out putting the three slide screens behind the Lego Lamb Stage.

I always knew I could do this with a computer sat behind the model, however the most slick and efficient way to create the effect was to use a digital photo frame. These can play movies (with audio), not just display pictures. I’m so happy that the DVD release of the Lamb Lies Down On Broadway includes the slides. This video track only required some editing to move the screens to be positioned in the middle (vertically) of the screen. Plus sometimes the 3 screens moved out of alignment during the album.

The DVD also showed live clips of the band and zoomed in and out of the screens. I decided to leave this as is. An optional cardboard mask is placed in front of the photo frame to show the slit of the three screen. It can be removed to display the whole image, as shown on the DVD. A lighting rig has been built to create a complete diorama experience. Now plug everything in and watch (or play)