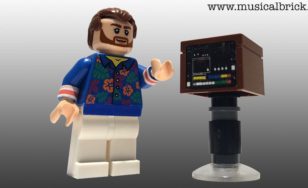 Bisexual because he doesn’t mind who he plays with!

Roland are well known by hip-hop and dance musicians for their 808 kick drum and 909 snare sounds. However these machines and sounds have been around since 1980.

Interestingly, before these machines there was a Roland box of tricks with some very different sonic sounds.

The Roland CR-78 CompuRhythm is an analog Rhythm Machine, not a drum machine, and was the first to use a microprocessor. It has 34 built in preset rhythm patterns and 14 very electronic yet analog drum tones. More information on the CR-78 here.

Although it came before the classic 808 and 909 sounds, the CR-78 has been used in all forms of HipHop, R&B and electronica, including: Underworld, Fatboy Slim, BT, 808 State.

Genesis were one of the very first people to buy the CR-78. Mike Rutherford visited the Roland factory when the band was on tour in Japan in ’78 and bought 3 units there. At one time Genesis owned seven!  Each member had one for home and a few more for the tour bus(es). Phil Collins didn’t want his unit at first (as it was kind of an insult to him as a drummer) but he fiddled around with it when working on Face Value (which he started in ’79).

Phil Collins — “In the Air Tonight”, “Hand In Hand”, “Tomorrow Never Knows”, “We Fly So Close”