This is NOT Brexit Satire; Monty Python and Genesis

HomeThis is NOT Brexit Satire; Monty Python and Genesis 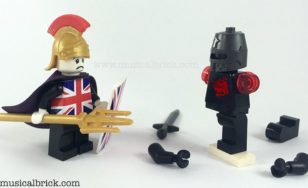 Can You Tell Me Where My Country Lies

The Black Knight Dancing with the Moonlit Knight

A Genesis and Monty Python Connection

In 1975 ‘Monty Python and the Holy Grail’ was released. If you said it looked low budget, then you would correct. The whole film was shot with a budget of $400,000. The BBC would not fund the film at all. Income tax in 1974 in England was around 83%.

Its initial budget of approximately £200,000 was raised by convincing 10 separate investors to pitch in £20,000 apiece. Genesis were among those investors, along with Pink Floyd and Led Zeppelin. Tony Stratton-Smith, head of Charisma Records—the record label that released Monty Python’s early comedy albums—asked them to contribute. Genesis were on the same label at the time.

So these groups cut some money off of their income from their music, and being fans of the Monty Python crew, funded the majority of the film. Without them, we wouldn’t have classic scenes like this: