What Bill Bruford thought of Genesis 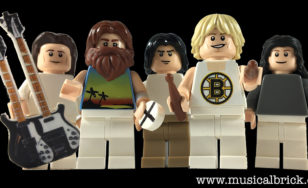 Bill Bruford, who is best known as the drummer of Yes in the early years and then of King Crimson, was another person that suggested that Phil Collins should become the singer after Peter Gabriel left in 1975.

In 1976 both drummers were working together in Brand X; Collins on drums, Bruford on percussion. Genesis had auditioned many singers, but no one stood out. Bruford vaguely remembers saying, “Why don’t you stand up front and sing, and I’ll cover for you on the drums? Then, you know it won’t fall apart.” He offered to do it for a bit until they got comfortable and found someone else. He felt no deep affinity to the band’s music. “I was just concerned with doing a good job on drums as a kind of ‘hired gun'”. He has been quoted as saying, “I behaved badly, sniped critically and impotently from the side lines”, for which he subsequently apologised. Bill Bruford would spend 6 months touring with Genesis in 1976. You can hear recordings from the albums Seconds Out and  Three Sides Live. Below is live footage of  Genesis live in concert 1976.

“I like to wing it a bit on stage, but Genesis were very, very precise”

In the book Genesis: Chapter and Verse (2007), it is interesting to note some comments made by Bill Bruford about Genesis.

His comments on the early days of Genesis:

I think everybody in Yes and King Crimson thought that Genesis would never make it because they sounded like a combination of the two groups. We thought they might be too late — we’d been there and done it. We saw them along the lines of ‘Genesis are quite fun, but they’ve got a guitarist who sits down like Robert Fripp and a drummer who plays a bit like Bill; the Americans have already had that’. . .

I like to wing it a bit on stage, but Genesis were very, very precise. I’m much more accustomed to making it up as I’m going along. . . I’d learnt the tunes from the albums, and if it felt a little different from what Phil would have done, people would look at me and say, ‘Hey, Bill, could you make it sound a bit more like the record?’. . . [N]ot being much of the session type, I didn’t do terribly well at just delivering the parts. In fact, what finally drove me out of rock n’ roll was the repetition. That’s what had separated me from Yes. Why I had found King Crimson so attractive was because they were way more open: ‘Surprise us, go ahead, let’s improvise, terrific.’. . . (p. 198).

The mood in Genesis was such a contrast to the chaos of Yes, where nobody could agree what day of the week it was . . . How we in Yes ever got anything done, I still don’t know (p. 199).