What is the Lamb Lies Down on Broadway by Genesis All About?

HomeWhat is the Lamb Lies Down on Broadway by Genesis All About? 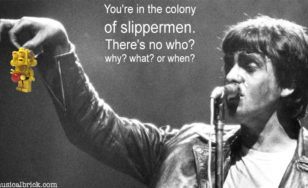 “What is the Lamb about?” The Annotated Lamb Lies Down on Broadway

Check out ‘The Annotated Lamb Lies Down on Broadway’ which merges the Lamb’s liner text with the lyrics and concert stories, to present a story combining the three that reads straight through. The link also contains various interpretations.

The analysis of the lyrics in each song is especially interesting. Check out this example:

The cheerleader waves her cyanide wand, there’s a smell of peach blossom and bitter almonde. Caryl Chessman sniffs the air and leads the parade, he know in a scent, you can bottle all you made.

[Caryl Chessman (1922-60) was an American convict-author who was con- victed on 17 charges of kidnapping, robbery and rape. He was granted 8 stays of execution by the governor of California and therefore spent the longest period on record on death row: 12 years. He carried out a brilliant legal battle from prison, learned 4 languages and wrote sev- eral best selling books during this time. He was eventually executed and the publicity generated worldwide criticism of the American judic- ial system. He was one of the first people to die in a gas chamber. The smell of peach blossom and bitter almond is the characteristic one for cyanide gas. The phrase “in a scent” might be a play on words also meaning “innocent.” If this were the case “innocent, you can bottle all you made” would then mean that if Caryl were to successful- ly prove his innocence, he could bottle up, or put behind him, his previous actions and go free.]

“The Lamb” was intended to be like a “Pilgrim’s Progress”,” said Peter, “an adventure through which one gets a better understanding of self — the transformation theme.” Now You’ve Had Your Flash, Boy…

This article by Sylvain Despretz is truly fascinating. He has unique insight because of his personal acquaintance with Alejandro Jodorowsky. Peter Gabriel has been known to have described Alejandro Jodorowsky as “the only person who could direct a movie based on The Lamb”.

“What is most important in understanding the album is that Peter is Rael, the message is not about some gratuitous fictional and abstract third party concept, but about a direct experience, and the trip he was on was urgent, and life changing–one of sudden ego collapse, and descent into the darkness, with a realization at the end of the tunnel.” Check out this link for some more interesting ideas as to the meaning of the album.

“Whatever Rael’s problem is, or whatever crime he committed, it had something to do with the sexual or carnal motive. Now whether this is some sort of sex crime, or sexual more he is breaking is undetermined, but I think what is more being alluded to here is the production of testosterone, and male aggression. It would seem fitting that in a tale of a tough street punk, who has to learn another way to be, emasculation or castration and the suppression of male aggressiveness, which leads to many fights (within and without) is his main cause of downfall. Without this guiding influence, Rael has half a chance of redemption. Hence the Visit to the Doktor. From there you can build what does turn out to be an almost linear tale.”