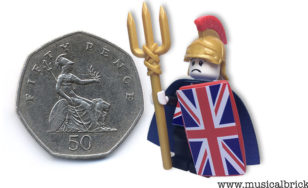 Genesis fans know. Genesis fans also knew about the dangers of the Giant Hogweed before it swept through the U.K. this year. Genesis provides great education.

‘Dancing with the Moonlit Knight’ by Genesis is about the effects the British economy had on every day lives of Englishmen at the time in 1974. Large companies were destroying Britain’s heritage and the first oil crisis happened right around that time. Peter Gabriel dressing up as Britannia seemed a very apt visual metaphor for the very clever lyrics of this song.

Leading lady is lost to a nation

“Britannia, the woman who has symbolised the nation for 2,000 years, is routinely mistaken for Queen Victoria, Boadicea, or even Margaret Thatcher.

Despite having featured on British coins for the past 340 years, a Royal Mint survey showed one in four British adults don’t recognise Britannia.

Controversially dropped from the new 50p in 2008, Britannia is about to return on a set of commemorative coins designed to restore the image of the woman who personifies our island.

Now the Mint has dispatched living statues dressed as the national icon to London, Glasgow and Cardiff.

Shane Bissett of The Royal Mint, said: ‘Britannia was originally the creation of the Romans, a proud figure representing a loyal and steadfast outpost of the empire.’

She first appeared on coins during the reign of Hadrian and inspired the rousing anthem ‘Rule Britannia!’, set to music by Thomas Arne in 1740.”