The Enigma of Mr. Fripp (from Fragments) by Trifecta 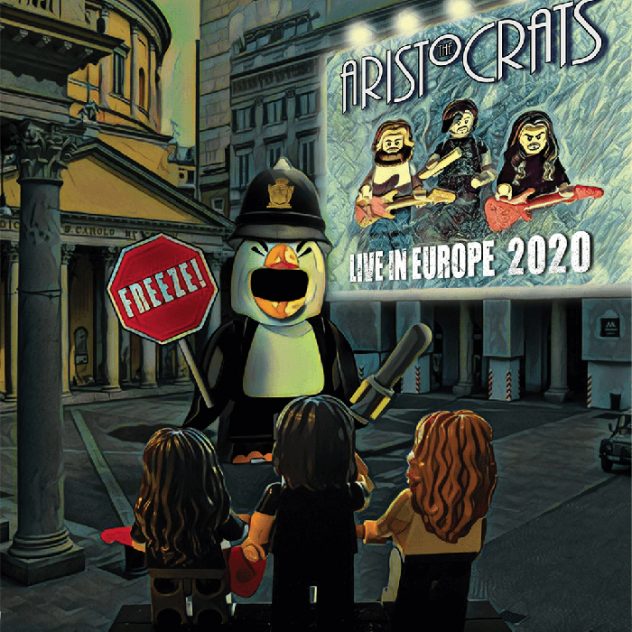 Lego figures featured on the album cover of FREEZE! Live In Europe 2020  by The Aristocrats. 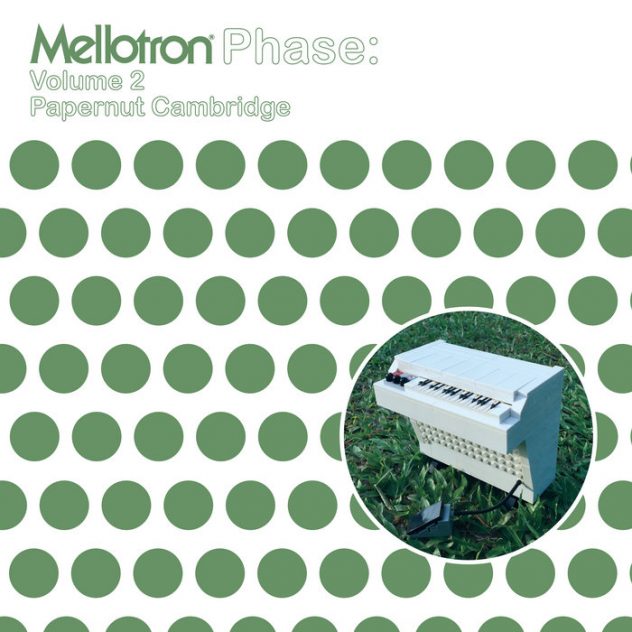 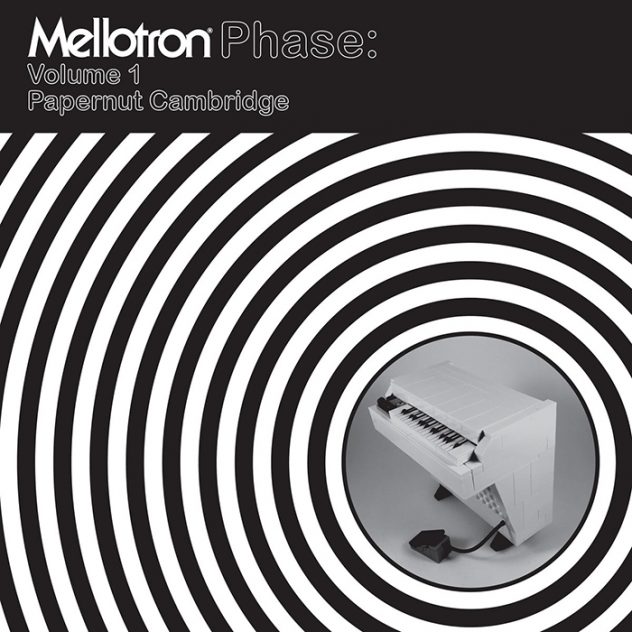 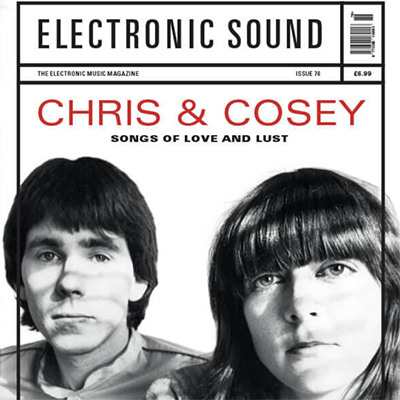 “A LEGO representation of Kraftwerk’s 1981 ‘Computer World’ tour? No problem. If you’ve got a spare $120, ‘Brickwerk Stage 81’ can be built to order by LEGO music specialist Dan Kerson. Our favourite quartet come equipped with their own hand-held controllers used to famous effect, but while Kerson’s Kraftwerk sets are great (see also ‘Brickwerk Stage 78’), his real thing is prog rock, particularly Peter Gabriel, whose various Genesis costumes are the house special. We’re delighted to see he has made a Steven Wilson/Porcupine Tree set too. LEGO is truly wasted on the kids” 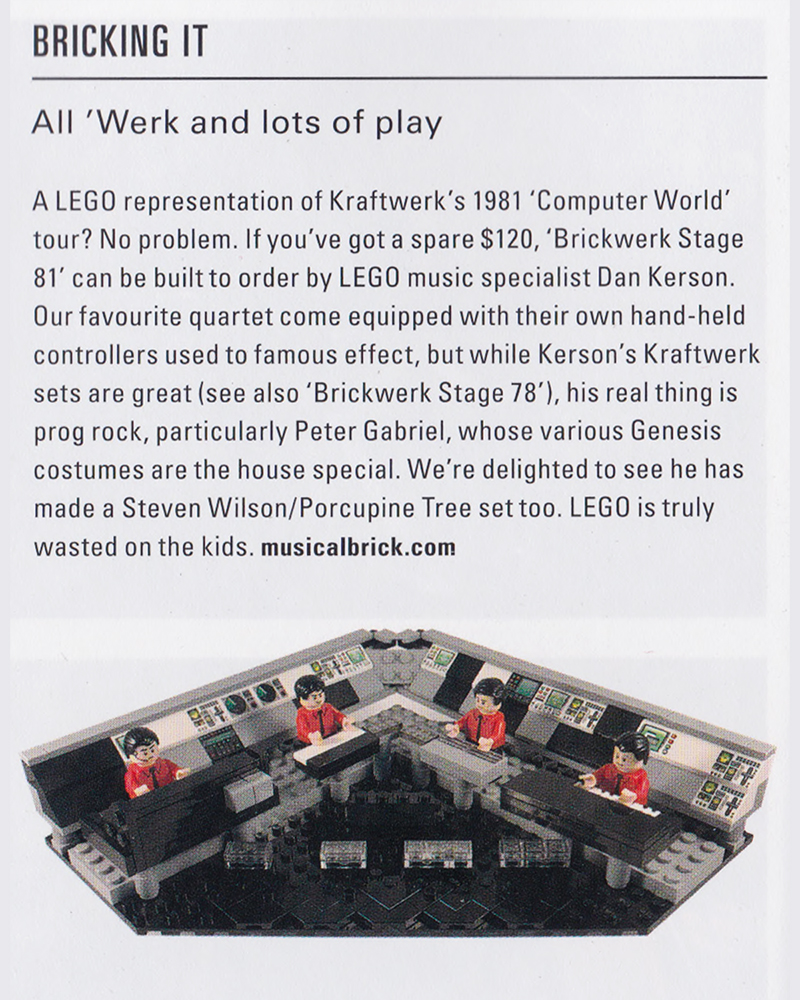 “As someone who has spent a lot of time making Lego with all my four kids, though not as much as my wife, it was a treat to see some of the characters I portrayed immortalised into Lego figures. I think the Fox Head stands out, as it was the first time I’d ever been out in a mask. It was genuinely shocking at the time – which seems incredible nowadays. That and the bat wings had the most impact, with the long introduction to “Watcher Of The Skies”.  That was always a great way to open a show. “ 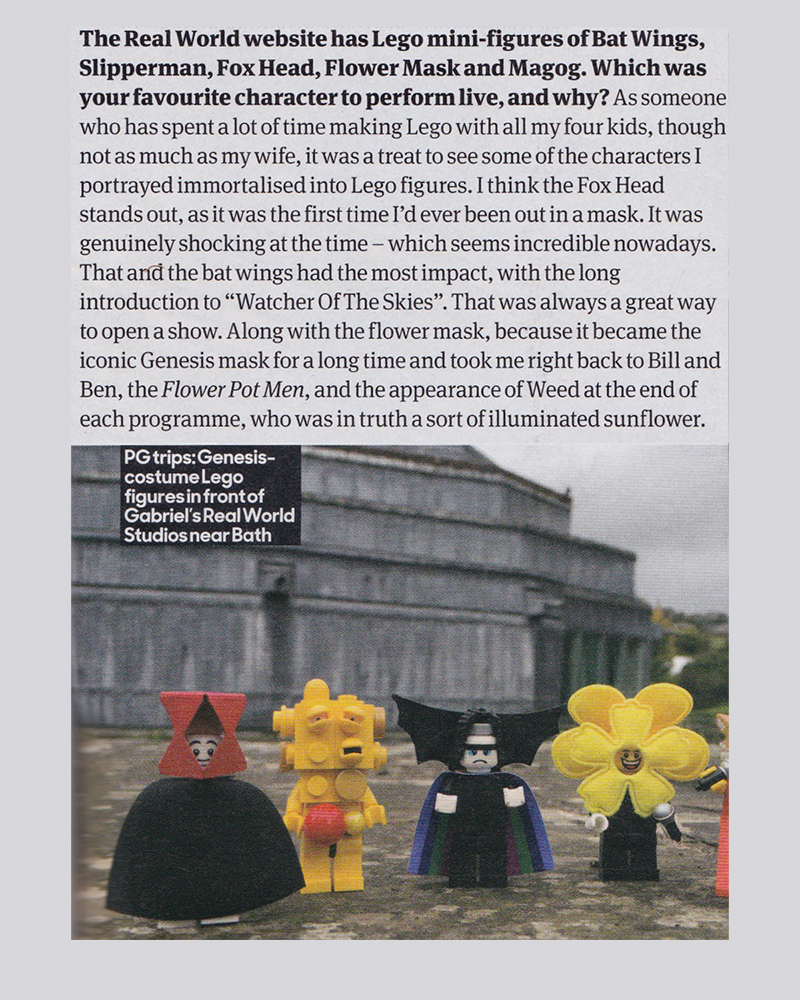 Minifigures featured on Peter Gabriel’s website.
Peter is a fan commenting: “I love this!” Celebrating the early songs of the influential progressive rock band Genesis, The Book of Genesis are the leading UK Genesis Tribute band. “One of the most interesting holiday rock trinkets to come along this year are Lego mini- figures of early-era Genesis from Musical Brick. They are wholly endorsed by Peter Gabriel, so much so that they sold out on his own web storefront.” 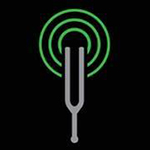 “Cute, or weird, or … what the heck is going on here?! The folks at musicalbrick.com appear obsessed with making Peter Gabriel into a real square—literally. For fans that might relate a bit too closely with the role Legos played in their formative years, these “must-have” mini-figures are available to indulge bouts of childhood regression that cannot be avoided.” Joe mentions our ‘5 Genesis Christmassy / Wintry Songs‘ blog post on the Phillin’ Up On Genesis Podcast. 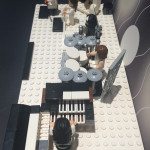 Genesis (the band, not the biblical book) in LEGO
Bom Bandido (28 Sep 2016) Portugal

“Dan Kerson does amazing reproductions in LEGO of the classic lineup of Genesis from the 70s. (including: Peter Gabriel, Phil Collins, Steve Hackett, Mike Rutherford and Tony Banks)” “Whoever is responsible for this store has spent more time focusing on Peter Gabriel than anyone outside of himself and, possibly, his wife. What we’re basically saying is, if Peter Gabriel ends up murdered someday, you should probably question the dude making tiny versions of Peter Gabriel for a living first before you go onto other suspects.” “A set of rhubarb and custard Lego Genesis cupcakes for a massive Genesis fan and tribute band member. Who would have thought you could get such specialised Lego? I wonder if Peter Gabriel knows he and his costumes have been immortalised in such a way.”