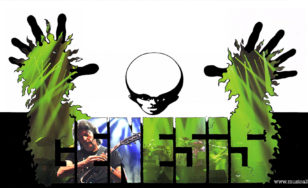 Genesis are one of the pioneers of progressive rock. Here we pick some of their better known advancements that the group would embrace and propel into the world of music and stage performance.

A two-handed technique in which one uses the fingers of the right hand to fret notes on the neck of the guitar, which allows you to phrase passages very rapidly without the limitations of a pick. Basically a way of playing many notes very quickly. Metal guitar players love it!

“I’m the inventor of tapping on record,” he says. “We haven’t found anyone who tapped earlier than me, unless somebody did it in the 1930s, but I doubt it.”

“Eddie and I have never spoken about it, but yes, he has credited me with tapping. When you see old films of Genesis from 1971 on, you can see me using the technique. It’s there on many recordings, as well.”

Genesis – The Return of the Giant Hogweed 1971

Phil Collins is one of the pioneers of drum machines and one of its more intelligent implementers.

Genesis were one of the very first people to buy the CR-78. Mike Rutherford visited the Roland factory when the band was on tour in Japan in ’78 and bought 3 units there. At one time Genesis owned seven!  Each member had one for home and a few more for the tour bus(es). Phil Collins didn’t want his unit at first (as it was kind of an insult to him as a drummer) but he fiddled around with it when working on Face Value (which he started in ’79).

What is the gated drum? Everyone knows the  drum part on “In The Air Tonight”. Well that uses gates (or more accurately gated reverb) on drums.

The origins actually begin on a Peter Gabriel record, when Phil Collins played drums on the track “Intruder” produced by Hugh Padgham. The effect was both discovered and invented.

“The room wasn’t especially large, but it was live. The SSL console through which they were tracking had a built-in “Listen Back” button which enabled the control room to hear what was going on in the live room at the push of a button. A permanent microphone hanging in the room fed a microphone preamplifier and a rather aggressive limiter. The limiter was there, not for it’s sound quality, but for the utility it offered, narrowing the level difference between loud drums with guitars and a distant/faint voice. Usually the button was pressed during conversations, not performances. Engineer Hugh Padham, “Well, it just so happened one day that I had that talkback mike open when Phil was playing the drums in the studio…” and he was smart enough to recognize the potential of the sound. He refined it further with a well-timed gate.
And so began the 80s.” https://recordingology.com/2013/10/06/intruder/

Genesis were always putting on a multimedia show during their tours. Be it screen projections, costumes, lasers, mirrors or jumbotron screens. However one technology we all take take for granted today, that of a moving light that can change colour, was spear-headed by Genesis. As early adopters of moving light fixtures, Genesis would take some of the very first units on the Abacab tour (1981). They actually invested heavily in the company after being shown the first prototype and their manager Tony Smith even suggested the name “Vari-Lite”.

“I’d been dreaming for some time of an instrument that could sample stuff from the real world and then turn it and make it available on a keyboard.” Gabriel was the first owner of a Fairlight Series I in the UK. The Fairlight CMI (short for Computer Musical Instrument) was one of the earliest music workstations with an embedded digital sampling synthesizer. Read this interesting article about the man who sold the world on sampling.

Peter Gabriel’s Shock the Monkey (1982) was one of the first tracks to use sampling technology utilizing the ground breaking Fairlight CMI and and other classic machines such as the Linn Drum and the Prophet 5 synth.

“Pure enthusiasm for music from around the world led us to the idea of WOMAD in 1980 and thus to the first WOMAD Festival in 1982. The festivals have always been wonderful and unique occasions and have succeeded in introducing an international audience to many talented artists.”

“Equally important, the festivals have also allowed many different audiences to gain an insight into cultures other than their own through the enjoyment of music. Music is a universal language – it draws people together and proves, as well as anything, the stupidity of racism.”